Government should be doing more to enrol civil society as it struggles to overcome massive backlogs and a surge of new demands for delivery of services.

Government policy frameworks and the constitution require that government meets a wide range of basic human needs or – if it cannot do so immediately – produce plans for their progressive realisation. In addition to socio-economic services, government also has the obligation to ensure access to justice, community participation in shaping society and the effective functioning of democratic systems.

In a developing country context, it is a heavy load for government to carry, even if government was working well on all fronts.

Civil society organisations such as NGOs and CBOs represent a national resource. They are as much a part of South African fabric as the new government, and in their work and existence preceded the democratic government. Most want to see changes in people’s lives – and are prepared to work to bring it about. They can play a bigger role in advancing development objectives.

There are those on opposite ends of the spectrum who will not be in favour of government and civil society organisations (CSOs) working together to realise development objectives.

Conservative forces within government would advise government and the ruling party to stay clear of CSOs. Government is in charge and should just press ahead, working directly with communities. In the spirit of a strong and developmental state, government should just go ahead and implement as it sees fit, or so that view goes.

Leftwingers would argue that any collaboration with government would be “doing the work of government”. It would be supporting the right wing ideology that argues that the state should play a smaller role in national development.

But the truth lies somewhere in the middle. Problems in development countries are huge but headway can be made if sectors work to find common ground. Furthermore, the constitution, in its understanding of governance, envisages that we all combine our efforts to achieve developmental objectives.

Government spokespersons will no doubt enumerate their own requirements for partnering. However in my engagement with CSOs, they emphasize the following about partnership:

Of course, relationships will not always be plain sailing. In a society plagued by race and class conflict and where fierce intra-party and inter-party rivalries coexist with daily community protests, CSOs and government will also have tense standoffs.

Nonetheless, there are many areas in which specific government departments and CSOs can work together – or increase collaboration – as partners to find solutions and advance objectives set out in the Freedom Charter.

We can draw lessons from, and possibly expand on, interesting examples of collaboration such as these:

– The Department of Labour in some provinces engages community-based advice offices to ensure workers get access to information and assistance related to labour rights.
– The Department of Social Development and its provincial counterparts works with CBOs to roll out victim empowerment services to those affected by rape and domestic violence. (Sadly, however, government keeps slicing away at NPO funding for critical activities such as post-rape services while government's own unit costs for such service continues to climb).
– During the recent xenophobic violence in Durban, NGOs and government had to work together in providing relief. Many NGOs were first on the scene and spent days and nights working to provide assistance to victims. Furthermore, government must work through CSOs in rolling out community-level campaigns to raise consciousness and counter xenophobia.
– NGOs and some units based at universities play a sterling role alongside CBOs supporting farmworker struggles and providing information about labour and tenure rights.
– In health, the Treatment Action Campaign plays a role in monitoring services to people living with HIV and Aids. The Black Sash is similarly is engaged in a joint programme with national government to monitor service delivery at provincial levels.

Outside of collaboration on specific programmes and issues, our constitution envisages a broader interdependency between CSOs and government. Civil society organisations should for example have a voice in national discussions on key policy issues and future direction, in the same way that trade unions and the private sector do. This could be done through apex organisations (network bodies) supplemented by good representation of organisations that directly represent the views and spirit of the grassroots. In this regard, there are huge gaps partly based on dismissive attitudes in many parts of government and on fragmentation and the scarcity of strong networks within civil society.


The need for such strategic-level engagement must be addressed, even as attention is paid to gaps in partnership at local and provincial levels.
Posted by Frank Meintjies at 10:05 No comments: Links to this post

I make a contribution to Book Week 2015 by launching my poetry book, Unfettered Days. In this work, I continue to grapple with private and public concerns and to foster deeper understandings by trying to grasp truth and understanding by examining of the particular.

In the book's afterword, poet and cultural commentator Lisa Combrinck notes that the poetry’s strength lies in “seemingly insignificant observations” that  “provide the reader with an intimacy that leaves an unease yet also, strange as it may seem, a feeling of deep fulfillment.” She also writes that: “The small revelations are what give the poetry great inner strength and significance”. Read all of Combrinck's comments in the afterword here: http://tinyurl.com/o9uqg8w .

Unfettered Days contains poems about jazz music, the landscapes of childhood, the fluid nature of memory, images of nature and the connections between urban and rural spaces.

Copies of the book can be obtained through the Melville branch of Bookdealers (www.bookdealers.co.za). 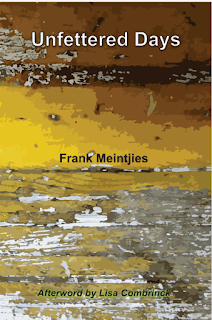 Posted by Frank Meintjies at 19:20 No comments: Links to this post