The role of arts in transformation

What role does the arts play in social transformation? In what ways does it contribute to peace, development and social justice? These issues are explored in the book Changing our World; Art as Transformative Practice edited by Michelle le Baron and Janis Sarra. 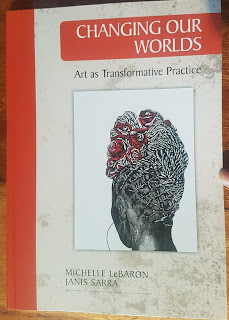 This book, among other things, endeavours to break new ground. It coins the term TAP (for 'transformative arts practice') and refers to TAP practitioners. A question that arises is whether TAP practitioners identify as such - whether for example the late Hugh Masekela would have viewed himself as a TAP practitioner. Since the label is new, most likely not. But if TAP was considered in terms of its essence, many on all continents would align with it, the book argues, and many would likely see themselves as part of the project of fostering the arts as transformative practice.

In my small contribution to the book, I worked on 'how to build a TAP field', so such questions came up. A field is when organisations and individuals see themselves as some kind of 'community' working together to solve problems and develop certain shared practices.

The theory aside, it is worth mentioning two other points here. The first is that arts practitioners who acknowledged that art had a role in the fight against apartheid were much more connected and coordinated in the pre-1994 period. They worked together in and across disciplines, and, for example, made their mark in creating pathways for emerging artists from oppressed communities to emerge and feel supported. The current period, by comparison, is marked by fragmentation and dislocation. So, we may ask: 'what's to be done?' - a question addressed in the exploration of how to build a field.

The second additional point is that in this book we put our heads on the block and link TAP in a fundamental way to Ubuntu. By using the word transformative, "(o)ur focus is on those (practices) that have embedded within them a set of values summed up here as Ubuntu and the goals of enhancing social and economic fairness and reciprocal belonging". In this regard, when we were working on the book, one of the authors, Kitche Magak, often noted that ubuntu was both African and universal - although we acknowledge Africa as the labeler and a place where many practice it more consciously, the call of Ubuntu has relevance and application the world over. Magak (in his chapter) stresses the 'humanising capacity of the arts'. And in a summary of one of our workshop discussions (made possible by Stellenbosch University), he noted that "(h)umanising arts challenges, confronts and contradicts dehumanising dominant ideology". I hope this gives some feel of the content/contents of the book.

The book is published by African Sun Media and Stellenbosch Institute for Advanced Studies (STIAS).

Posted by Frank Meintjies at 08:22